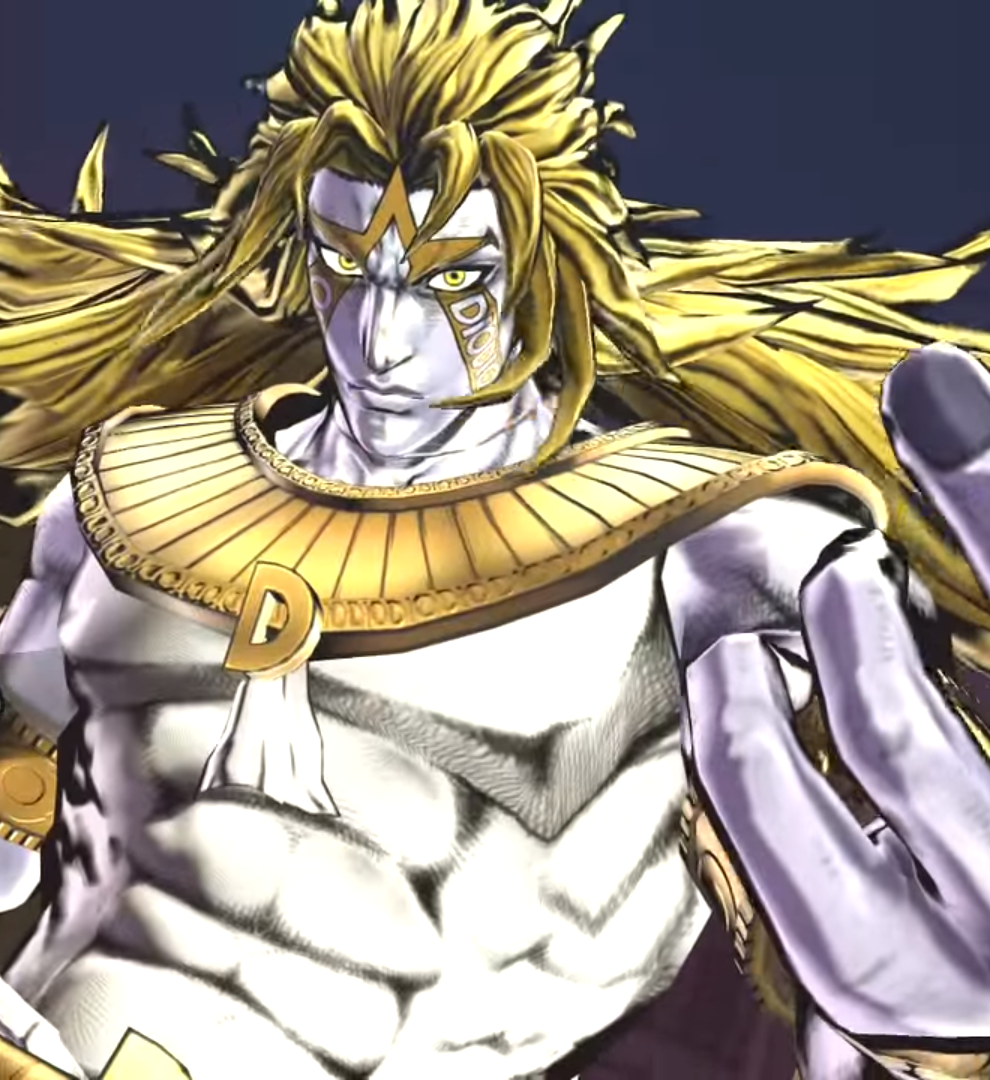 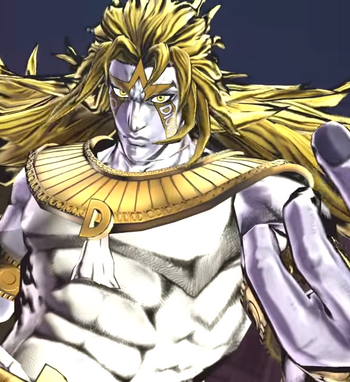 Heaven Ascension DIO (天国に到達したＤＩＯ, Tengoku ni Tōtatsu-shita DIO) is the ultimate form of DIO from an Alternate Universe, featured in JoJo’s Bizarre Adventure: Eyes of Heaven as the main antagonist of the game.

Originally existing from an alternate universe where he killed the Joestars, this DIO achieved his goal of “obtaining heaven” and as a result, has obtained complete god-like powers and the “ultimate Stand” referred to as The World Over Heaven.

DIO is dressed in a long white robe, with a white cape and white chaps with a golden trim, adorned with golden kneepads, golden boots and a belt bearing a “D” motif and arm cuffs engraved with his name. His chest is covered with a white tank-top and an Egyptian-esque neckpiece that bears a “D” on it. DIO’s hair is much longer, while his skin has taken a slight purple hue; not unlike Star Platinum. His face itself now has a golden star on his forehead with ceremonious markings running down his cheeks repeating the word “DIO”; the marks themselves are similar to Enrico Pucci’s hair once he created Made in Heaven.

(The information below derives from Eyes of Heaven, which was not written by Araki. As such, it may or may not be considered canon.)

Heaven Ascension DIO originally existed in an alternate timeline in which the events of Stardust Crusaders ended with the annihilation of the entire Joestar bloodline. DIO succeeded in killing Jotaro Kujo, Joseph Joestar and the other members of the Joestar Group. Now free to pursue his original goals of “obtaining heaven”, DIO collected the souls of the “36 Sinners” required alongside Enrico Pucci as he evolved his Stand and became the perfect being with godlike power, Heaven Ascension DIO. Now unrivaled and unstoppable, DIO proceeded to conquer the world and rewrote all of humanity so that they would worship him as their one true god.

Around this time, during the ending of Steel Ball Run, President Funny Valentine tried desperately to escape from the “Infinite Spin” set on him by Johnny Joestar. In the process, Valentine skipped through dimensions until he eventually arrived in Heaven Ascension DIO’s world. DIO used the power of his Stand, The World Over Heaven, to remove the infinite Spin from Valentine and in return, Valentine told DIO of the Saint’s Corpse Parts and that his reality was merely an alternate branch of the main dimensional universe. Having already conquered his world and desiring the satisfaction of doing so to the original universe as well, DIO used his power to travel through dimensions; resurrecting his fallen acolytes and brainwashing new ones from other timelines to serve as his army.

DIO, armed with the Spine of the Saint’s Corpse, set his followers out to battle the Joestars and their allies. He patiently waited as his brainwashed minions were defeated one by one until the Joestars collected all of the remaining Corpse Parts. DIO then summoned the Joestar Group to his realm, where he easily defeated Gold Experience Requiem and Tusk ACT4. DIO stole the Corpse Parts from the group and planned on sacrificing them to perform the ritual of “obtaining heaven” all over again to increase his powers even further. However, Jotaro managed to hang on to his Corpse Part and escaped along with the others.

DIO, now irritated but still collected, spread out the Corpse Parts to his generals and sent them to eliminate the Joestar Group. In the meantime, DIO managed to discover that Valentine was secretly a turncoat and was trying to discover which of the Joestars possessed the power to defeat DIO. Confronting Valentine about his treachery, Valentine fought DIO throughout many dimensions but, in the end, lost. DIO, not wanting to waste such a powerful Stand user, offered Valentine forgiveness in exchange for his eternal loyalty. Valentine, however, retained his integrity and refused only to be swiftly killed by DIO and erased from existence. DIO then confided in his friend, Pucci, about how he was troubled over the Joestars in this timeline being more problematic than he anticipated. Pucci reassured him that everything would go according to his plans and went off to confront the Joestars himself. Pucci ultimately lost to Jotaro and his daughter, Jolyne Cujoh. As Jotaro questioned Pucci about the secret to DIO’s Stand, Pucci instead committed suicide while pledging his love and service to DIO even in death.

With Jotaro and the others having re-obtained the other Corpse Parts, they traveled to Cairo, where DIO planned to defeat them all in battle. DIO fought against Jotaro and Jolyne and subsequently lost. However, he negated the damage done to him using The World Over Heaven. Jotaro, now witnessing DIO’s power up close, discovered his Stand’s ability to overwrite reality itself through the use of its fists. DIO claimed that Jotaro knowing his secret was futile and banished the Joestars’ allies to other dimensions, allowing him to stall for time to charge The World Over Heaven’s power. With Jotaro and Jolyne staying behind to fight DIO, the other Joestars prepared to battle their brainwashed allies, only for Giorno Giovanna to realize too late that they had fallen into DIO’s trap. DIO unleashed the full power of The World Over Heaven and killed all of the Joestars and their allies before absorbing their souls into himself.

Now gloating over his imminent victory to Jotaro and Jolyne, DIO combined the Saint Corpse Parts with the 36 souls to ascend to an even greater form of existence, causing the very fabric of reality itself to start warping into DIO’s twisted vision. Jotaro and Jolyne teamed up to take down DIO but, while they managed to defeat him, it was only a brief victory as DIO healed himself once again and killed Jolyne with a single punch before absorbing her soul as well. DIO proceeded to deliver an apparently fatal blow to Jotaro as he gleefully relished in his assumed triumph. However, Jotaro mysteriously negated the damage done to himself, which caused DIO to recoil in shock. DIO remembered that Star Platinum and The World Over Heaven were still the same type of Stand and, as a result of DIO evolving his Stand, he had inadvertently caused Star Platinum to evolve as well.

Now armed with the power of Star Platinum Over Heaven, Jotaro regained his composure as DIO’s sanity began to crumble. DIO, now desperate to destroy Jotaro once and for all, unleashed a powerful attack, only to inadvertently punch the bracelets of the original timeline’s DIO. Jotaro had secretly acquired these bracelets after Valentine informed him that, if two identical objects from different dimensions were to collide, they would violently cancel each other out. The bracelets fused with DIO’s current ones and exploded, resulting in both of his arms being destroyed and rendering him powerless. DIO desperately tried to use his own blood to blind Jotaro, however the attempt proved futile; just as it did in the original timeline. Mirroring his original downfall, Jotaro delivered a decisive punch to DIO, which caused his entire body to break down and explode as hundreds of souls poured out of him.

As a result of Heaven Ascension DIO’s death, a new timeline was created where the events of Eyes of Heaven never took place, yet every heroic fatality throughout the original universe’s parts was negated. This ultimately resulted in a universe where none of the Joestars and their allies died, bringing about an era of peace.

Main article: The World Over Heaven

DIO’s evolved Stand, The World Over Heaven, in addition to his ability to stop time, can now overwrite reality itself as well(but if he loses the use of his hands he can no longer do this until he heals himself).This also allows him to rewrite anything within any timeline (except for changing his Stand’s range), granting him godlike power.

DIO in his ascended form has the powers of teleportation, instantaneous regeneration, resurrecting the dead, mind control and can summon lightning bolts to attack and target his opponents. He also appears to have the ability of dimensional travel, similar to Funny Valentine’s D4C.

This form, however, is not exempt from the rules of D4C’s dimension hopping. As no two versions of the same person or thing can co-exist in the same dimension, should Part 3 DIO or something connected to him, like his golden bracelet rings, come in contact with Heaven Ascension DIO or their matching item, both versions will collide and destroy each other. Jotaro exploited this when he shattered Heaven Ascension DIO’s arms with the aforementioned Part 3 DIO’s bracelet rings.