What does it mean that God is the Rock of 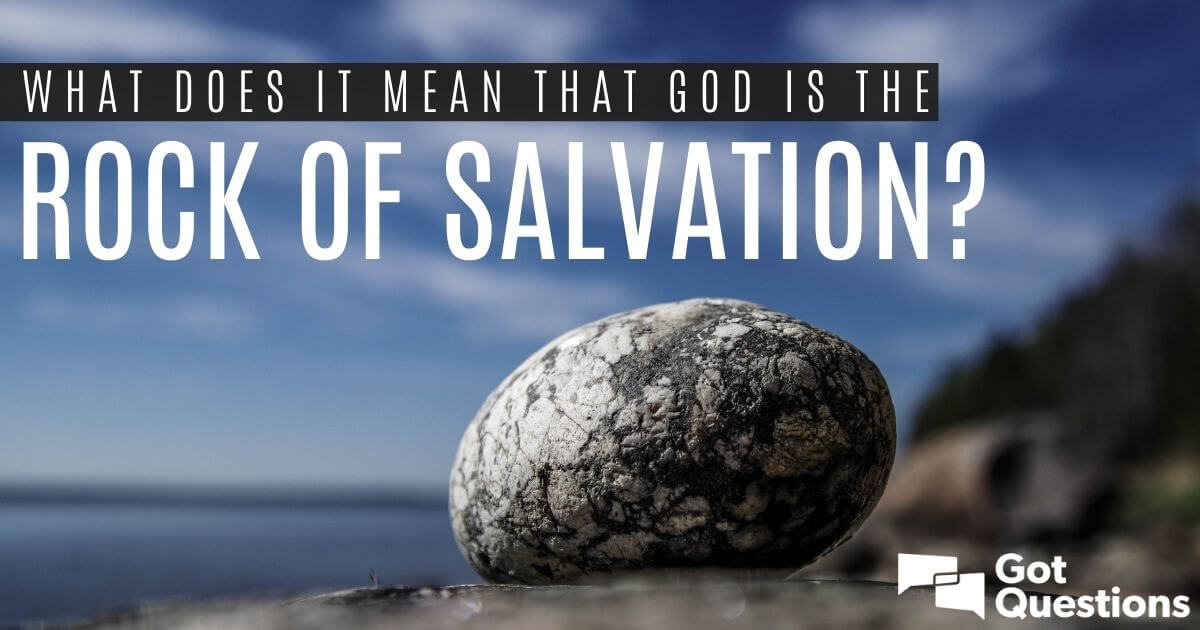 The statement “God is the Rock of my salvation” occurs several times in the Old Testament (Deuteronomy 32:15; 2 Samuel 22:47; Psalm 89:26; 95:1). In each case, the expression evokes vivid imagery and a sense of security. God is a trustworthy, rock-solid Savior.

High cliffs and crags abound in biblical lands, and the Israelites often found themselves hiding in caves and mountain crevices from the enemy (see 1 Samuel 13:6). Considering the many battles fought in Israel, rocky areas were also ideal locations for strong, protective city fortresses. Thus, the phrase Rock of my salvation undoubtedly resonated deeply with God’s people.

The psalms are thick with declarations similar to “God is the Rock of my salvation,” and for good reason. Caves and rocky crevices were often David’s refuge when running from Saul, who sought to kill him (see 1 Samuel 24:3), yet David’s language reveals where he truly placed his hope—not in mountains or great city fortresses, but in God, Creator of heaven and earth (Psalm 121:1–3). David declares, “Truly he is my rock and my salvation; he is my fortress, I will not be shaken. My salvation and my honor depend on God: he is my mighty rock, my refuge” (Psalm 62:6–7). David knew that, ultimately, it was up to the God of the cosmos to hide him from danger, material objects being the avenue by which He chose to provide such protection.

During the Old Testament period, specific knowledge about the Messiah had not yet been realized, so saying, “God is the Rock of my salvation,” was not an overt reference to salvation through Christ’s blood. So what might the idea that God is the Rock of salvation have meant in an Old Testament context? The Zondervan Illustrated Bible Dictionary explains, “In the OT, salvation refers both to everyday, regular types of deliverance—as from enemies, disease, and danger . . . and to those major deliverances that are specifically interpreted as being a definite part of God’s unique and special involvement in human history as well as special revelations of his character and will” (entry for “Salvation,” definition 1, p. 1272). Salvation’s emphasis in the New Testament is predominantly spiritual, but in the Old Testament salvation speaks much more about liberation within the physical realm. For instance, when Hannah prays in triumph, “I rejoice in your salvation. . . . There is no rock like our God” (1 Sam. 2:1–2, ESV), she rejoices over God’s deliverance from her barrenness as well as His granting that her husband’s name would continue on to many generations.

The meaning of God is the Rock of my salvation enlarges as the biblical narrative progresses. Isaiah 28:16 prophesies, “See, I lay a stone in Zion, a tested stone, a precious cornerstone for a sure foundation; the one who relies on it will never be stricken with panic” (cf. Psalm 118:21–23; Zechariah 10:4). The God who had delivered His people throughout history gradually provided more vivid glimpses, through His prophets, of just how far His salvation would reach. Isaiah’s prophecy clearly points to the hope of the Messiah, yet the truth that God, the Rock of salvation, would become flesh in Jesus Christ was not yet revealed.

In the New Testament as Jesus begins His ministry, His disciples and others still do not understand that He is the climactic saving act of the God of the Israelites. But after Jesus’ life, death, and resurrection, all doubt is removed (John 20:26–29). The spiritual Rock they had always worshiped had now become physical. On the day of Pentecost, the disciples’ bold preaching demonstrates their certainty that Jesus truly was this same Rock. Peter preaches, “Jesus is ‘the stone you builders rejected, which has become the cornerstone’” (Acts 4:11; see also 1 Peter 2:4–8). The canvas had now been filled with color, the painting now containing details that were once just faint ideas.

Its meaning greatly enlarged, Rock of salvation now resonates even more deeply in our hearts, as it relates not only to God’s deliverance within the physical realm but also to the ultimate spiritual deliverance He provides His people through Jesus Christ. Jesus is the Rock of our salvation, a sure and eternal refuge, the foundation on which rests the hope of heaven. “The one who trusts in him will never be put to shame” (1 Peter 2:6).