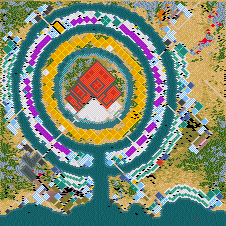 Zeus Heaven gets a small make-over

After many years, Zeus Heaven has been modernized a bit: it’s now possible to use the site on phone without having to zoom and scroll, plus we have added a search feature in the sidebar on the left.

If you’re interested in buying the game nowadays, both GOG and Steam have it available. Don’t forget to apply the Animations Patch, which fixes slow gods and unmoving urchin catchers on modern faster computers.

The years have passed, and the Mighty Zeus is pleased with the usage of the Downloads Section at his heaven. Nevertheless, he is curious how we feel about it, and has decreed a new survey to solicit feedback. We, as mere mortals, are obliged to comply. Show honor to Zeus by sparing a minute or two to participate in the download survey.

The city of Atlantis minimap, as generated by ZeusMapper.

ZeusMapper allows us to add an extra visual element to the saved cities that we share with the world-wide player community. Kudos to Pecunia for providing us with this capability!