Isko warns voters vs other camps’ gold raffle: Don’t be 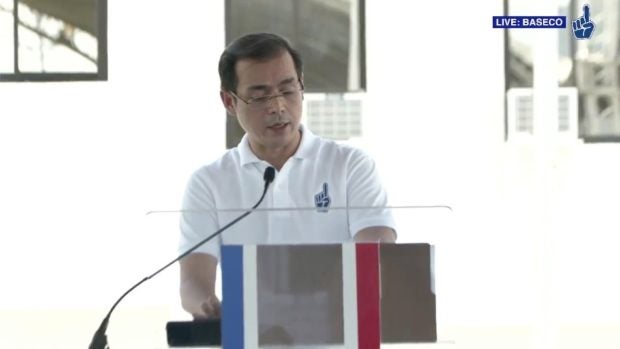 MANILA, Philippines — Manila Mayor Isko Moreno has warned Filipinos who may be targeted by other political camps’ claim of a gold raffle contest in exchange for support, saying that they should think hard about possibly enduring six years of hell if these aspirants win.

Moreno said in an ambush interview on Wednesday that he has received reports that there are teams roaming Metro Manila, asking people to sign up in a piece of paper to join a raffle for gold bars.

According to the Manila mayor, people should not provide support for such candidates as they may be in exchange for six bad years of governance.

(We heard something like that, groups making rounds.  As you saw earlier, it seems that some groups doing that have already made contact in this area, inviting people to join the raffle by being listed.  That’s why my reminder is to exercise care, because Yamashita’s gold has not been discovered.)

(There may be a lot of people making rounds or stories claiming that people would get gold and cash.  That’s why as a candidate I am informing the public that the election is only one day.  But we will spend six years in hell.)

Moreno said that it’s a metaphor that he thinks people would understand.

(It’s a metaphor, wherein it’s just a simple reminder in the way I know it and how to talk to people in a manner that they would easily understand.  But please be vigilant, you may be tricked into these schemes.  Because our future, our next six years lie on this political exercise.)

When asked if he was referring to someone by mentioning the Yamashita gold, he said that he also heard rumors in the past that a certain politician would hand out part of the loot.

(No, but before there was a promise of distributing the gold of Yamashita, right? But we really have to at least educate our people for that, so that they can realize that maybe because they are poor, because they are struggling to survive, that they are being targeted with sweet words about getting money which does not exist.)

“Ngayon obligasyon ko ‘yon, bilang nakakaunawa, na iyon ay hindi totoo.  Ano ‘yon, fancy ‘yon, tanso (Now it is my obligation as a person who understands it, to tell them that it isn’t true.  That’s not true, that’s mere copper),” he added.

Moreno noted that the reports of people going around to solicit raffle joiners also happened in Manila.

(Some already had their names listed.  Even in Manila, some already joined to have a chance at luck with the gold that they may win.  But please be careful, I don’t know who the candidates behind these are, but the thing is it’s existing, people are moving around Metro Manila.)

The local chief executive did not mention any names, but the Yamashita treasure — named after Japanese general Tomoyuki Yamashita who was once tasked to lead Japanese forces in the Philippines during the Second World War — has been linked to the Marcos family.

In fact, late dictator and former president Ferdinand Marcos has claimed numerous times that the source of his wealth was not ill-gotten, but from being able to find the Yamashita gold left in the country.

Late Baguio-based treasure hunter Rogelio Roxas also claimed before that he discovered the golden Buddha statue from the Yamashita loot, but it was taken by Marcos.

Claims of raffles for part of the Marcos wealth and the gold however, are not new.  In 2017, crowds gathered at the University of the Philippines campus in Los Baños, Laguna, for the alleged provision of P1 million cash and gold bars to lucky winners.

Then-senator Bongbong Marcos, son of the late strongman, denied any involvement in the event, saying that it was a scam.

Marcos is running in the 2022 national elections against Moreno and other presidential aspirants.

READ: Thousands flock to UPLB to get P1M each ‘from Marcos wealth’

Don’t miss out on the latest news and information.