Does the Bible Tell Us Why Was Jesus Crucified? 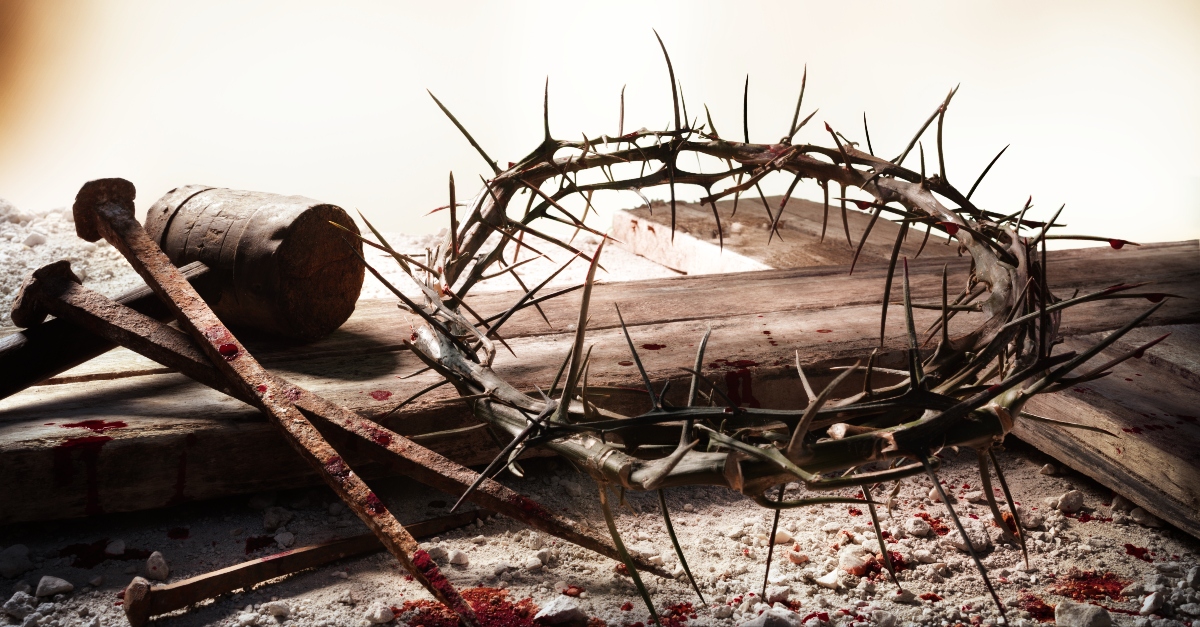 We know that Jesus’ death on the cross had huge consequences, but we may ask, “why was Jesus crucified on that cross?” What exactly was Jesus charged with? Was the sentencing accurate, and why death on a cross?

To answer these questions, we need to look at the events leading up to Jesus’ crucifixion and what we know about the situation.

When Was Jesus Sentenced to Death?

After the last supper, Jesus and his disciples went to the Mount of Olives. There, his betrayer Judas brought temple guards and identified Jesus for them to arrest him (Luke 22:39-53). The apostles scattered, with Peter following Jesus’ captors as they took him to the home of Annas, father-in-law to the high priest Caiaphas (John 18:13).

When Jesus refused to answer Annas’ questions, the authorities took him to Caiaphas’ home (John 18:19-24). Various priests came, and witnesses gave evidence against Jesus that didn’t match up (Mark 14:55-59). Jesus didn’t answer these accusations even when Caiaphas asked for his response (Matthew 26:62-63).

Caiaphas asked Jesus a direct question: “Are you the Messiah, the son of the Blessed One?” Jesus responded, “You have said it. And you will see the Son of Man seated in the pace of power at God’s right hand and coming on the clouds of judgment” (Matthew 26:64).

Caiaphas was horrified at this response, and all the priests declared that Jesus was guilty and should be killed (Matthew 26:65-68). They then took him to Pilate with accusations about Jesus disrupting Roman rule (Luke 23:1-5). Jesus answered Pilate’s question about whether he was the king of Jews but not about the other charges, which surprised Pilate (Mark 15:3-5).

Once someone mentioned Jesus was from Galilee, Pilate sent Jesus to Herod Antipas, who administrated that region (Luke 23:6). Herod was excited to meet Jesus because he’d heard about his miracles, but Jesus didn’t perform any or answer Herod’s questions (Luke 23:8-10). Herod mocked Jesus and sent him back to Pilate (Luke 23:11-12).

Pilate convened an assembly attended by Jewish leaders and a crowd of citizens and attempted to arrange a deal to crucify an insurgent named Barabbas and let Jesus go (Mark 15:6-8). Instead, the leaders convinced the crowd to ask for Barabbas’ release and Jesus’ crucifixion (Matthew 27:20-21). Pilate tried to appease the crowd but followed their request to avoid a riot (Matthew 21:24). The Romans took Jesus to Golgotha to be crucified.

How Did Crucifixion Kill Jesus?

The concept of someone being executed publicly or their body being displayed afterward is very old. There are references to executed criminals’ bodies left out on poles in Deuteronomy 21:22-23. Crucifixion was a variation on this idea that took the pain as far as possible, to the point that it inspired a new adjective: excruciating.

According to a 2003 article in the South African Medical Journal, crucifixion was invented around 600 B.C. by the Assyrians or the Babylonians. Persians were the first nation to use it widely, and Alexander the Great picked it up in the fourth century B.C. The Roman Empire began using crucifixion during the Punic Wars (264-146 BC) and used it until Constantine I banned it in 320 A.D.

As Alexander Metherell describes in an interview for Lee Strobel’s book The Case for Christ, crucifixion was painful even before it started. After sentencing, soldiers would flog the victims (which could kill people by itself). If they survived flogging wounds and blood loss, victims were taken to the crosses. They had their shoulders pulled out of joint (Psalm 22:14) as soldiers stretched out their arms on the cross. The soldiers hammered nails into the wrists—not the palms) because those bones were weight-bearing.

The way that victims’ arms and legs were spread out on the cross put their chests in an awkward position. Victims could breathe in once the cross was in the air, but they could not breathe out. To exhale, they had to push themselves up with their legs. Over time, the blood loss, dehydration, and exhaustion combined until the victims couldn’t push themselves up. If the soldiers wanted a quick death, they would break the victims’ legs (John 19:32). One way or another, the crucifixion victims would suffocate, followed by heart attacks.

Crucifixion was brutal and public: crowds watched the victims die, which could take days. Romans meant crucifixion to be public because it shamed the victim while sending everyone else a message: don’t mess with us. That could be you up there.

Due to the brutality and shame factor, Romans reserved crucifixion for rebellion and other highly serious crimes. By and large, Roman citizenship protected someone from being crucified (there were rare exceptions, especially in the early Roman Empire period). Due to this rule, the Roman citizen Paul was beheaded rather than crucified when Nero martyred him. Between two and six apostles died by crucifixion, depending on which church tradition accounts you read. At least one of them, Peter, was crucified upside-down. Andrew may have been crucified on an X-shaped cross.

Why Did the Jewish Leaders Sentence Jesus to Death?

Scholars have written whole books on how Jesus’ sentencing fits with what we know about Jewish and Roman law, debating whether his death sentence was properly reached.

The Jewish leaders sentenced Jesus to death because he said he was “the Messiah,” the prophesied son of God who would free Israel. By calling himself “The Son of Man,” Jesus went one step further, claiming to be the man who God gave everlasting rule over the earth (Daniel 7:13-14). This clinched the fact that Jesus was claiming Messiah status—that he was God’s son, therefore on God’s level. The Jews were expecting the Messiah, but proper authorities had to verify him. Anyone else claiming to be God’s son was blaspheming, which carried a death sentence (Leviticus 24:13-16).

However, as Michael A. Hall notes in The Promise and the Blessing, something wasn’t entirely legal about Jesus’ trial before the Jewish leaders. The first hearing took place at the home of Annas, a retired priest with no formal authority. The trial at Caiaphas’ house couldn’t be legal either since it happened after hours, outside Sanhedrin chambers.

The day the Jewish leaders put Jesus on trial also presents a problem. Caiaphas’ trial occurred either early Friday morning (Luke 22:66-71) or Thursday night, followed by taking Jesus to Pilate early Friday morning (Matthew 26:57-27:2, Mark 14:53-15:2, John 18:28). According to Harbin, “a capital crime could not be tried on the day before a festival or Sabbath.” Being tried on Friday morning (the day before the Jewish sabbath) would have been illegal. An after-hours trial on Thursday evening would have been minimally less illegal but not proper, especially since it was “the first day of the Festival of Unleavened Bread” (Mark 14:12).

Even granting that Jesus was found guilty of a capital crime by Jewish law, the Jews weren’t the ones who killed him. The Romans did, which raises another question.

Why Did Pilate Sentence Jesus to be Crucified?

While Jewish law stated blasphemy was a capital crime, Leviticus 24 mandated a specific penalty: stoning. While the Jewish leaders reminded Pilate that they could not execute someone (John 18:31-32), this may not have been entirely true. In Acts 7, they stoned Stephen for blasphemy without the Romans raising any issues. Herod Agrippa would later execute the apostle James for his religious activity (Acts 12).

This suggests that either the Romans had an unofficial policy of looking the other way when the Jews performed religious executions, or the Jewish leaders deliberately stepped over the law in Jesus’ case. They wanted Jesus to be made an example, executed by the Romans for rebelling against Roman rule. Thus, they took him to Pilate and accused him of opposing Roman taxes and causing trouble, all charges they didn’t prove (Luke 23:1-5).

Pilate saw immediately that this was about their feud with Jesus, and about Roman law (Matthew 27:18) (Mark 15:10). Knowing that Jesus wasn’t the political insurgent his accusers claimed, Pilate tried to work a compromise that let Jesus live while appeasing the Jews. His ploy didn’t work, and the crowd turned the verdict into a question of Pilate’s loyalty to Rome (John 19:12). So, Pilate had Jesus crucified before he had a riot on his hands.

Ultimately, even though Jesus was condemned for blasphemy and crucified on charges of being an insurgent against the Romans, neither charge stood up. Jesus was convicted of blasphemy in a problematic trial, the Jewish leaders skipped over the required punishment to have him killed for other crimes, and the Romans saw their bluff but gave them what they wanted.

G. Connor is a writer and editor, with a Bachelor of Science in Professional Writing from Taylor University. In 2020, he won First Prize for Best Feature Story in a regional contest by the Colorado Press Association Network. He has contributed over 900 articles to various publications, including interviews for Christian Communicator and book reviews for The Evangelical Church Library Association. Find out more about his work here.

Learn more about the meaning and significance behind the Easter holiday and Holy Week celebrations:

At Easter, the Son of God took on the world’s sin and defeated the devil, death, and grave. How is it, then, that history’s most glorious moment is surrounded by fearful fishermen, despised tax collectors, marginalized women, feeble politicians, and traitorous friends?

In The Characters of Easter, you’ll become acquainted with the unlikely collection of ordinary people who witnessed the miracle of Christ’s death and resurrection. This FREE podcast provides a fresh approach to the Lenten season and can be used as a devotional or study for both individuals and groups.