How to complete Hyetta’s quest in Elden Ring 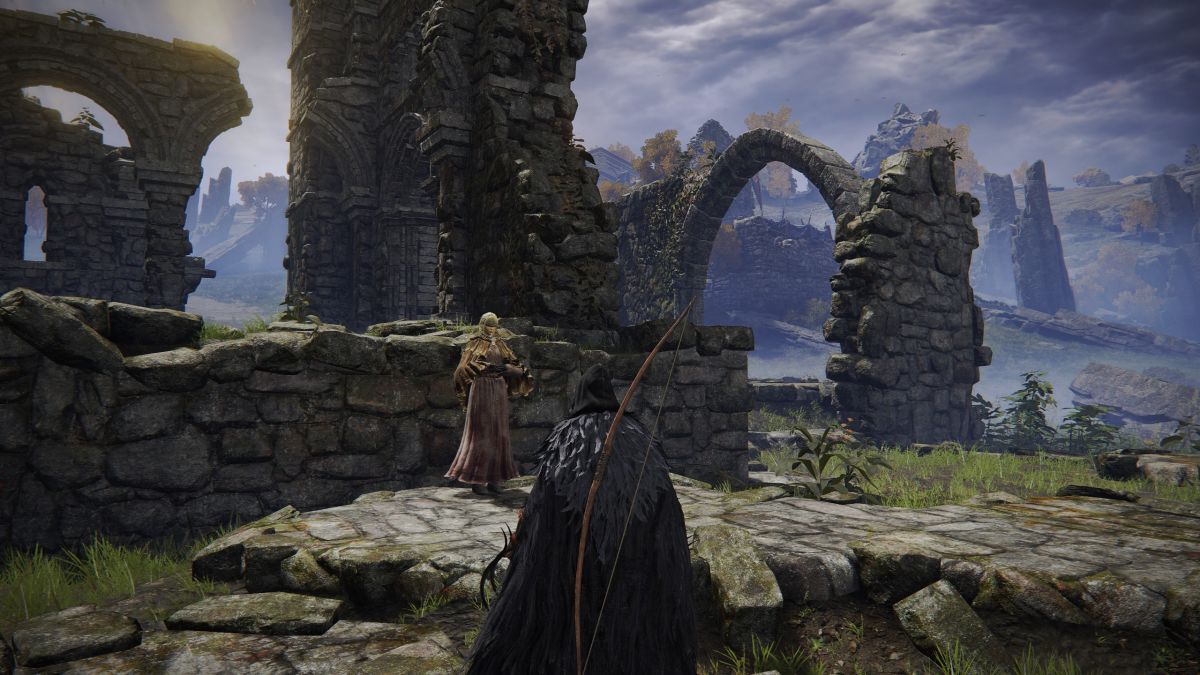 Need a hand with the Elden Ring Hyetta quest? This quest is relatively simple, compared to other NPC quests anyway. It’s not a particularly long one, though the final step will take place right at the end of the game. Completing this quest doesn’t trigger any of the Elden Ring endings, but you will need a specific ending to finish the final step in this quest—you’ll miss out on the weapon reward otherwise.

When you meet her for the first time, Hyetta requests that you bring her a specific item that is only found in certain locations. Like other NPCs, she’ll change locations, depending on which step you’re on so it can be hard to keep track of her. I’ll try to keep spoilers to a minimum, but click away now if you’d rather not chance it. Here’s what you need to know to complete the Elden Ring Hyetta quest.

(Image credit: From Software)Image 2 of 2

Spirit NPC that gives you a Shabriri Grape. (Image credit: From Software)

The first place you’ll meet Hyetta is close to the Lake-Facing Cliffs Site of Grace in Liurnia. This is the first you’ll activate once you leave Stormveil Castle after beating Godrick, though you can also access it by using the shortcut.

If she’s not showing up for you, make sure you’ve started Irina’s quest in Weeping Pennisula south of Limgrave. It doesn’t seem that you need to complete it to meet Hyetta, but you need to pick up the letter Irina gives you.

When you find her at the Lake-Facing Cliffs, she’ll ask for any Shabriri Grapes you might have. The first one you can find is in Stormveil Castle, in the room where you descend the ladder after beating Godrick. You don’t need to defeat the boss to get here, though—just look for the small doorway into the castle from the Lake-Facing Cliffs Site of Grace.

Once you have the grapes, hand them over to Hyetta and you’ll receive the “As you Wish” gesture. Rest at any Site of Grace to move her to her next location.

Hyetta’s location at the Purified Ruins. (Image credit: From Software)Image 2 of 2

The doorway to the cellar in the Purified Ruins. (Image credit: From Software)

Locating Hyetta at the Purified Ruins

Hyetta will now move to her next location at the Purified Ruins, southwest of the Liurnia Highway North Site of Grace and directly east of Laskyar Ruins. And as luck would have it, you can get the next Shabriri Grape nearby, too.

There’s a wooden floor blocking a cellar at the Purified Ruins and several enemies guarding the area. Clear them out and roll to break the floor and head down the steps. The grape is on a corpse to your left as you enter the room. There’s also a chest here you can loot for the Two Fingers Heirloom talisman.

Offer the grape to Hyetta and rest at a Site of Grace to progress.

Where to find Edgar

Hyetta’s next move takes her to the Gate Town Bridge Site of Grace, just to the north. You need one more Shabriri Grape and this one comes from Edgar, Irina’s father. If you killed him during the quest, he should have dropped the item, though you don’t actually loot it from him—it appears if you reload into the area and return to where he died. Otherwise, arriving at the Revenger’s Shack Site of Grace in west Liurnia will prompt him to invade you.

If he doesn’t show, make sure you’ve done all the steps in the quest, including talking to Edgar after killing the Castle Morne boss and returning to the Bridge of Sacrifice to find him in Irina’s original location.

Once you’ve retrieved the Shabriri Grape, return to Hyetta and hand it over. This time she’ll ask you what they are. Tell her the truth.

Where to get the Fingerprint Grape

Now you need to find Hyetta at the Bellum Church Site of Grace, northeast of the Raya Lucaria Academy. This time she requests a Fingerprint Grape which you’ll need to kill an invader at the Church of Inhibition to get.

If you’ve completed Varré’s quest, you might have already visited the area. If not, your best bet is to take the path to the south of the Grand Lift of Dectus and wind your way up to the church at the top of the cliff. It’s not as easy as it sounds, either, as you’ll need to deal with the madness inflicted by the Frenzy Flaming Tower nearby.

Your best bet is to run through the area using Torrent and use the terrain whenever you can to line-of-sight the tower. Once you get near the Site of Grace at the Church of Inhibition, Festering Fingerprint Vyke will invade you. Defeat him to claim the Fingerprint Grape, then return to Hyetta at Bellum Church and hand it over.

How to get the Frenzied Flame Seal

The final step of this quest takes place at the Frenzied Flame Proscription Site of Grace beneath the Subterranean Shunning-Grounds in Leyndell, Royal Capital. Once you’ve spoken to Hyetta near the Frenzied Flame door and exhausted her dialogue, follow her directions by unequipping your weapons and gear and head through the door. This action triggers one of the endings, so be sure this is what you want to do.

Once you’re done, return to Hyetta in the same location and touch her. After quite a bit more dialogue, you’re rewarded with the Frenzied Flame Seal, a weapon that boosts Frenzied Flame incantations.